. Muay  Thai fighters utilize the maximum power in every technique which is generated by the twisting the hips and the turning of the waist in execution of the movement. Bone strength, endurance, and stamina must be achieved in order to become a proficient Thai fighter. The art of self-defense where the elbows, feet, fists, and knees are used to pummel the opponent. The fists and feet are used for long-range combat while the elbows and knees are used for short-range combat. 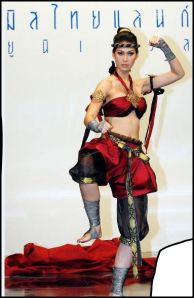 Muay Thai is sometimes called “Thai Boxing” or “Thai Kickboxing” because the techniques of this style are not practiced in sets commonly referred to as “forms – Kata’s or Koso’s” which can be found in Japanese, Chinese and Korean martial arts. They are, however, practiced in much the same manner as in regular western boxing (hence the addition of the term “Boxing” ), which allows the practitioner to develop power, speed, and a spontaneous reaction to attacks. The practice of “forms” do not properly develop the qualities which are the most essential elements in becoming a good Thai combatant. The simplicity of the footwork and techniques are some of the main reasons why Muay Thai has been considered to be one of the most effective styles of Asian martial arts. Also, techniques that were believed to contain less destructive power such as finger strikes and “snap” kicks were completely removed making it a more efficient fighting art. There are many types of grabbling which can involve the arms, body, leg, neck, and shoulders of the opponent. Clinches can aid the Thai fighter in maintaining balance while striking with the knees, in maximizing the force of a blow by pulling the target area closer to the striking weapon, and in preventing one’s adversary from getting away while offensive techniques are being executed. A Thai fighter usually delivers an elbow, knee, punch, or kick while grabbing the opponent rather than a “push kick straight or thrust kick, which is mainly used for defense and for creating distance between his opponent. No other fighting art has adapted this form of close range combat and in the specific use of the elbows and knees more than Muay Thai. The length of time needed for a fighter to acquire the self-defense attributes found within Muay Thai is much less than in most other martial arts.

STANCE There is only one stance in Muay Thai. Every technique is performed from this fighting position. One leg is placed in front of the body with the foot of that leading leg facing straight towards the opponent and the heel of that foot is slightly raised off the ground. The other leg is placed behind with the foot of that rear leg facing at approximately 45 degrees away from the leading foot. The rest of the body is also turned at a 45 degree angle in sync with the rear foot. A side-on stance is much more advantageous to the fighter than frontal-stance because it minimizes the target areas. Frontal-stance exposes most of the bodies vital points while side-on stance makes it extremely difficult to effectively deliver any of Muay Thai’s most powerful techniques. The distance between each foot should be about shoulder-length and shoulder-width apart from each other and most of the bodyweight should be in the rear leg.

The shoulders are raised and the forearms are lifted in front of the face. The hands can either be in an open or closed position depending upon the personal preferences of the boxer in question. Some Thai fighters choose to bounce their leading legs up and down in order to be able to execute a “push, straight, or thrust kick at any given moment. The footwork prevents the legs from being crossed during combat as doing so puts a fighter of balance.

FOR STANDARD BOXERS, move rear leg backwards and to the right. Lead leg follows it while maintaining basic fighting stance. BLOCKS AND EVASION MANEUVERS Most of the blocks in Muay Thai are direct impact which requires the fighter to develop the strength of his or her bones. The Thai fighter usually does not divert or neutralize the force of the opponent’s blows as in most other martial art styles. A Muay Thai stylist would prefer to condition his or her body so that it becomes physically strong enough to withstand the force. The forearms and shins are the common tools with which Thai fighters use to shield their bodies from incoming offensive attacks. Most Thai fighters from Thailand start at a young age while their bones are still in the process of growing, therefore it is a lot easier for them to strengthen their forearms and shin bones by accumulating a high degree of “callus” in order to turn them into versatile blocking implements.

Most modern muay thai students  start at an older age, usually entering competitions in the mid teens, which makes it a lot harder for them to toughen their shin and fore arms as their bones have usually passed the stage of continues growth. It is therefore better to begin training as young as possible.

SINCE 2004, ABHIMANYU ACADEMY HAS BEEN TRAINING BANGALOREANS IN THE NOBLE ART OF MUAY THAI, KICKBOXING, SELF DEFENSE AND WEIGHT LOSS PROGRAMS. CALL/SMS 9242876397 to ENROLL! View all posts by ABHIMANYU ACADEMY OF MARTIAL ARTS & FITNESS